Another 'grainy' old view of the Boulevard, but still interesting to see how it altered from decade to decade. The Telegraph building was built in the last decade of the 19th Century (c1895) and this postcard probably dates from around the turn of the 20th Century. I think the railed shrubbery/flower beds, survived into the late 1930's. Probably only removed to salvage the metal railings for the war effort, circa 1939-40. 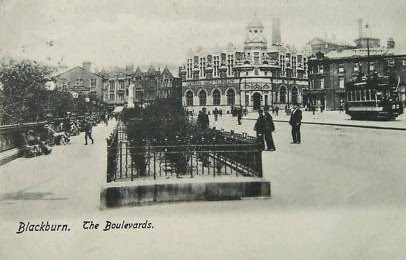 COURTESY OF THE CP COLLECTION
Posted by Blackburnlad at Saturday, November 21, 2009