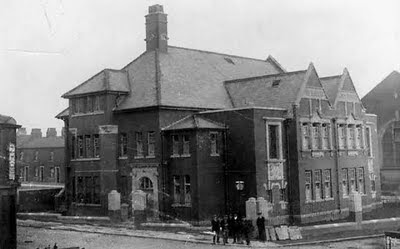 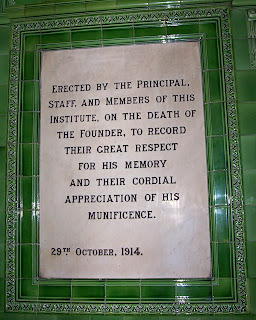 This is an early photo of the Harrison Girls' Institute on Hollin Street. It served to educate local girls in the more vocational subjects. Those subjects included dressmaking, domestic science and cookery. Behind the Institute, just over the small wall on the left of this picture, were two hard tennis courts and a badmington court for the girls use. The Girls' Institute was opened in 1910/1911.
To the right in this photo, can be seen the gable of the Harrison Gymnasium, which was opened a couple of years earlier (c1908) than the Institute and served the boys.
As well as providing employment for many, in their iron foundry, the Harrison family gave a lot to the town of Blackburn, including the Gymnasium, the Institute and the Hollin Bridge Street Recreation Ground. They paid for furniture and X-ray equipment for the Infirmary. They also made substantial donations to workshops for the blind, the teetotal mission, the School of Art and the (then) new Technical School.  When he died in 1914, almost a quarter of Henry Harrison's £344,000 will, was left to local and national charities.
They were good people and I think, that over time, their generosity and 'munificence' has been forgotten. This is my attempt, in a small way, to rectify that. I wanted the council to name the new bridge (2008) on Bolton Rd after the Harrison's, but they called it the Wainwright Bridge instead.
The memorial in the second photo, was on the wall, just inside of the doorway seen above.
PHOTO COURTESY OF COTTONTOWN & THE COMMUNITY HISTORY DEPT. OF BLACKBURN LIBRARY AND (MEMORIAL TABLET PHOTO) COLIN PRITT.
INFORMATION COURTESY OF BARRETTS DIRECTORIES AND GRAHAM CHADWICK
Posted by Blackburnlad at Tuesday, December 01, 2009