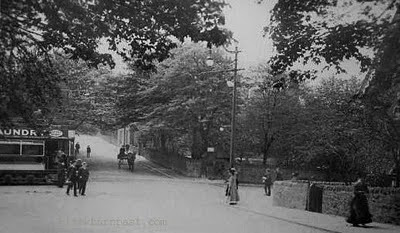 A few folks getting off the tram at Billinge End. Unsure of the year, but it looks to be around the first decade of the 20th Century.  Pre WW1, I would think anyway.
The advertisement on the tram  appears to be for a laundry, probably Rosehill Laundry, as I've seen other photos of Blackburn trams with that on the side of them.
COURTESY OF THE CP COLLECTION
Posted by Blackburnlad at Saturday, June 12, 2010