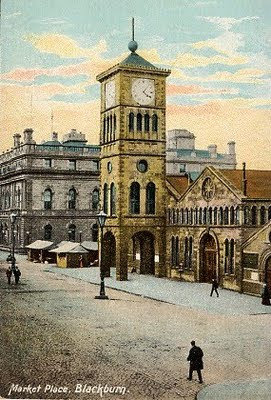 Here is an old image of the Victorian clock tower, which used to stand outside of the Market Hall. The clock tower was demolished, along with many of the other Victorian buildings in the 1960's (in 1964, I think). Something Blackburnians have regretted ever since. To anyone from Blackburn aged 50 or over, just mention the clock and they will probably say  ''They should never have knocked that down''  COURTESY OF THE CP COLLECTION

Posted by Blackburnlad at Sunday, November 15, 2009