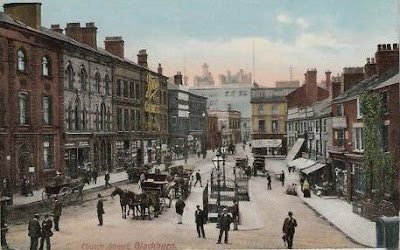 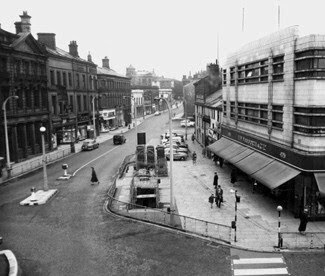 Not an uncommon image of Church Street, as this postcard has been reproduced a few times in various books, but quite unusual to see a coloured version. On the extreme right, the ivy covered house, was for many years the home of Dr W. R. Pollard. On the same side, amongst the various shops, can also be seen the Royal Commercial Hotel and the Golden Lion Hotel, before the junction of Victoria Street. On the opposite side of the street, almost facing Victoria Street, can be seen the premises of Boots Cash Chemist and at the top, on that side of the street, the outline of the gable end and chimney's of the very large Old Bull Hotel.
In the foreground of the photograph, almost central, are the underground toilets, which remained there until 1962.
A very busy and animated scene, well worth enlarging, if you have the facility / programme on your computer, to do so.
The black & white photo (not a very good one, admittedly) is just here for comparison and dates from the mid 1950's. 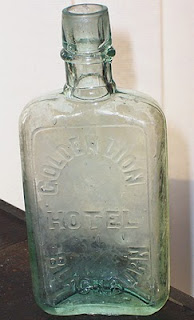 The bottle is a 19th century Whisky or Spirit Flask. These were sold at many pubs and hotels throughout the land. Usually embossed with the name of the establishment and sometimes the name of the landlord, they could be purchased and filled with your desired spirit, to be consumed off premises, then returned to the pub at a later time. This one, as you can see, was for the Golden Lion - Blackburn. Probably hundreds of them around at the time (1870 - 1920), but now quite a rarity. An interesting relic of Blackburn's past.
COURTESY OF THE CP COLLECTION
Posted by Blackburnlad at Monday, December 28, 2009