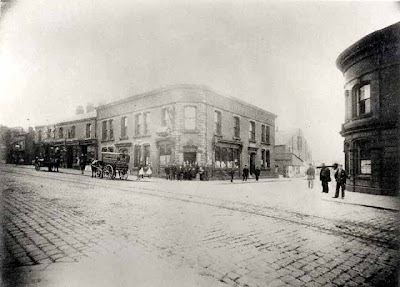 A nice, early shot of Darwen Street, taken from just below Mill Lane. Quite a crowd had gathered outside the Merchants Hotel, to watch the proceedings. To the right, midway down Jubilee Street, we can see the Grand Theatre.
No longer the Merchants, it is now called the Last Orders, Last Post or something like that. I think for a while, after being refurbished in the 80's, it was re-named Zanzibar. Was it then that it had a black & white decor, or was that after another refurb?
When I first started (underage) drinking in town, in 1974 ish, it still had a lovely old 1960's jukebox (Seeburg, Rock-Ola or similar).
Anyway, I digress, but as far as I'm concerned, it will always be the Merchants.
COURTESY OF COTTONTOWN & THE COMMUNITY STUDIES DEPT. BLACKBURN LIBRARY
Posted by Blackburnlad at Monday, January 18, 2010