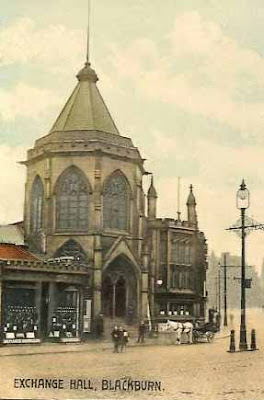 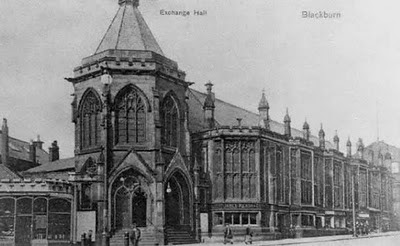 Two images of the very gothic looking Cotton Exchange in King William Street. The foundation stone was laid in 1860 and the original plan was for a central tower, with a wing, as above, running up the top part of K.W.Street and another wing, the same design and length, facing the Old Town Hall. But due to the outbreak of the American Civil War and consequently a blockade of the raw cotton leaving the southern states, thus creating a cotton 'famine' here in the UK, the second wing was never built.
Nearby Exchange Street (Where the Borough Arms is) gets its name from this building
COURTESY OF THE CP COLLECTION
Posted by Blackburnlad at Thursday, January 21, 2010