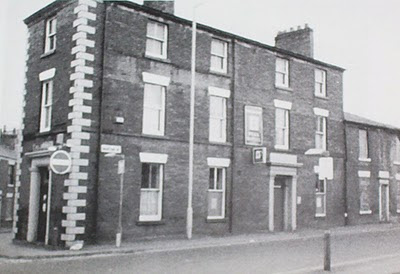 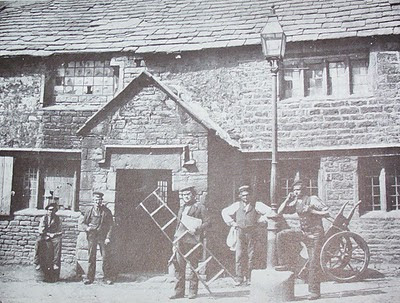 The top image is the Peel Hotel on Barton Street and at a guess, I would say it dates from the late 1960's or 1970's, as it has the Whitbread (ie, no longer Dutton's) sign by the doorway and the little terraced houses to the right are still standing, yet don't appear to be lived in. The houses were eventually demolished and an extension and new entrance were added to the pub and after being closed for the duration, it re-opened, refurbished, firstly as Salvador Dali's (see comments), then changed to the Malt 'n' Hops and later just 'The Malt'
The pub dates from the 1870's and very probably got its name, due to the fact that Sir Robert Peel was born nearby, on Fish Lane. The middle image shows the property the Peels lived in. It is believed that this particular photo dates from 1854 and is thought to be the earliest photo in the Blackburn Library archives.
The bottom image is a drawing from the latter half of the 19th century and was drawn by Chas (Charles) Haworth, who made many excellent drawings of Blackburn in the mid - late 1800's.
Fish Lane ran from Astley Gate through to Blakey Moor and sort of followed the line of present day Cardwell Place and Barton Street. It is thought the Peel home was more towards Cardwell Place than Barton St. There's a blue plaque near there now (see below).
I've never really studied the Peel family to any degree, but I do know that they were involved in textiles in a big way (in Bury, I think) and that various members entered politics, both local and national. I do remember being told at school, that Robert Peel (the younger?) played a big part in establishing what became the Police Force, which is why police officers became known as both Bobby's (Robert) and Peelers (Peel).

Posted by Blackburnlad at Friday, January 08, 2010