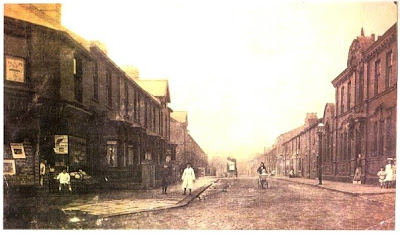 Superb period image of the Oozehead Hotel (right) on Manor Road/Long Row.
Looking at the clothes, it was probably taken around 1910, give or take a couple of years. The pub was built circa 1904, by James Cunningham's & T. W. Thwaites, Snig Brook Brewery.
In 1913, just a short time after this photo was taken, Snig Brook Brewery sold all their tied houses to Matthew Brown & Co (Preston) and then in 1921 sold their brewery, off Montague St, to Daniel Thwaites.
The photo below, shows the (closed) pub, as it was in April 2009.
Not too sure when Long Row became Manor Rd, but it was still known by the old name in the 1894 trades directory. Before the pub, the corner shop and the houses on the left hand side were built, the long row of stone handloom weavers cottages had stood alone along there, for at least 100 years. Built around 1800, they were built as 'club houses', whereby a group of individuals clubbed resources together and formed a 'Terminating Building Society'. One by one the properties would be built and slowly over time, a member of the society would move in. Not sure how they decided who got the first house and who got the last, but every member of the society would eventually get their home. There would sometimes be years between first and last being built. Once every member was housed, the society was terminated (hence the name).
Originally, they were built with a loomshop beside each cottage, so you had house/loomshop/house/loomshop, but as the factory system became more prevalent and working folks were employed in mills, the loomshops were converted into dwellings, sometimes extended dwellings and sometimes into a totally seperate home.