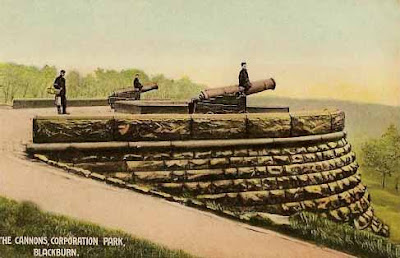 As it says on the card, this is a photo of The Cannons at the top of Corporation Park, just below Revidge Rd. I believe they were Russian cannons, captured at Sebastopol during the Crimean War. The actual metal cannons were later melted down for the war effort in the early 1940's. I think they were originally sat on wooden bases, which rotted and were then replaced by concrete. The concrete remained for decades after and probably still there today (unless they removed it during the Millenium 'tidy up').
COURTESY OF THE CP COLLECTION
Posted by Blackburnlad at Sunday, April 25, 2010