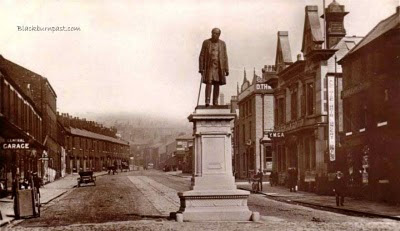 Brilliant old postcard image of Limbrick, as viewed from Sudell Cross. Not sure of the exact date, but at a guess, I would estimate it to be the mid - late 1920's. With the Central Garage on the left being in existence, motor cars must have been around for a while, to warrant having a garage? That's my theory anyway.
On the right is the YMCA, which had opened in 1910. Then just over Tontine Street is the original Sir Charles Napier pub. You can just see the start of the D.Thwaites & Co signage on the Tontine St side.
Central of course, is the statue of W.H. Hornby Snr, Blackburn's first mayor. As mentioned under a similar shot elsewhere on the blog, this statue now stands just to the right of the Old Town Hall.
The YMCA still stands and became the latter Sir Charles Napier pub and the cottages in the distance on the same side are still standing. The garage property on the left disappeared in the late 70's or 1980's, though the majority of the terraced houses further up still stand to this day.
Barbara Castle Way now cuts across the centre of this old photograph (This photo enlarges a bit, just click on it).
COURTESY OF THE CP COLLECTION
Posted by Blackburnlad at Wednesday, April 07, 2010