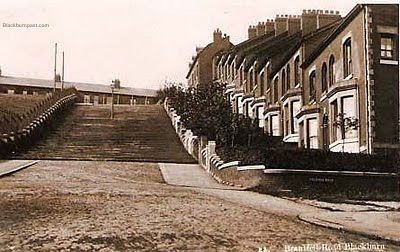 Brantfell Road, off Revidge. Better known to most Blackburnians as 'The Sixty Steps'
I'm not sure when this photo was taken, but because the railings on the park wall are still there, I think it it was probably taken before the Second World War, as most of the railings were removed from the park boundary wall, to help the war effort.
COURTESY OF THE CP COLLECTION
Posted by Blackburnlad at Saturday, May 15, 2010