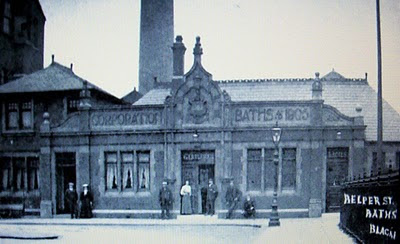 The Corporation Baths or as they were better known to most Blackburn folks, Belper Street Baths.
Like tens of thousands of other kids throughout the 20th century, this is where I learned to swim. Just up the road from St Albans school, it was walking distance for all us good little catholic kids and walk we did, a long, snaking line of us in pairs, all the way there and all the way back.
Not certain and I'll have to check, but I think part of that 1905 facade is still there to this day.
PHOTO COURTESY OF THE COMMUNITY STUDIES DEPT. BLACKBURN LIBRARY.
Update - March 7th 2011  - Lorcan Moriarty has been and had a look at this building, to see how it has changed since the days of the above photograph. Lorcan thinks (as I do) that the 'Corporation Baths 1905' is probably still there, under the modern cladding, but sadly it looks like the central coat of arms has gone. Below are two photos from Lorcan. One shows the frontage in its present state and in the other he has merged the old and the new, to demonstrate how it could look again, if the corrugated metal was removed to reveal the old name (less the coat of arms). 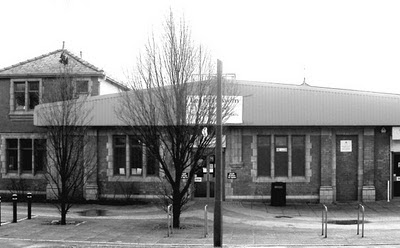 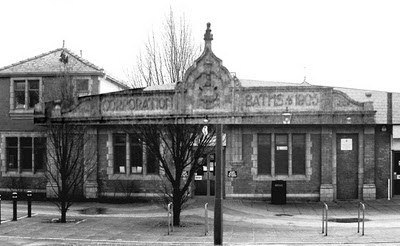