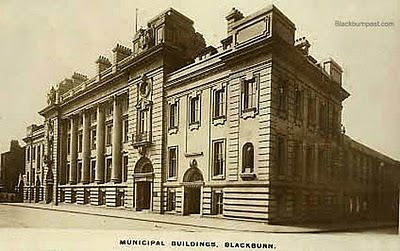 An old sepia coloured postcard of the magistrates courts, police station etc (Municipal Buildings) on Northgate. I'm assuming this section was built before the King Georges Hall side, as the buildings to the extreme left of the photo look like the older properties (pubs mainly, I think) that were demolished in the second decade of the 20th century. Duke Street is the street running down on the right of the photo.
COURTESY OF THE CP COLLECTION
Posted by Blackburnlad at Wednesday, June 23, 2010