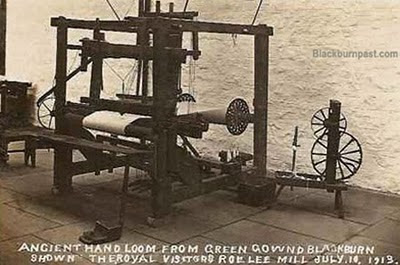 This is a postcard showing an old hand loom, like the type that would have been used from around 1780 (possibly earlier) in the weavers cottages around Blackburn. Cottages like the ones on Manor Road, Limbrick, Pleckgate, Four Lane Ends, Red Rake, Mile End, West View, Redlam, Card Fold, Livesey and various other locations around the town.
Our industrial heritage began on looms like this one, before production was moved into the factory or mill system.
As you can see from the caption, the loom was displayed for a royal visit to Roe Lee Mill in 1913, but the loom itself must have been used at Green Gown (on Pleckgate Road) originally.
You can just imagine some proud mill manager, showing this to King Edward, King George  (or whoever the royal visitor was) and saying  ''Well yor Maj, this is 'ow it all started, back in th'owd days. Mi grandad worked on this 'un when 'e wor a lad''
UPDATE - 06/01/2011 - Since typing the above, I have found out that a guy called Richard Ratcliffe was the very last handloom weaver in Blackburn. He had worked on power looms at Roe Lee Mill, but in 1890 he bought a cottage at Green Gown and returned to the handloom weaving he had been brought up on. He did indeed give a demonstration of his handloom weaving skills to King George V and Queen Mary in 1913 (hence the postcard). He died in 1921, aged 88.
COURTESY OF THE CP COLLECTION
UPDATED INFO COURTESY OF COTTONTOWN
Posted by Blackburnlad at Friday, July 09, 2010