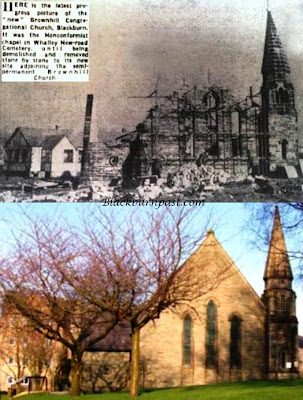 Another past and present exercise. This is Trinity United Reformed Church at Brownhill. This little building was once one of the three chapels that stood in the old cemetery off Whalley New Road. They dismantled it stone by stone, brick by brick and rebuilt it on its present plot. I haven't been able to determine whether that happened in the 1930's or the 1950's (probably the latter).
The early photo shows it being rebuilt, whichever decade it was.

If you were stood at the main gates of the cemetery looking towards the War Memorial, I think this chapel would have been somewhere to the right of the memorial, a bit further up in the cemetery. I've arrived at that conclusion, as looking on an old map, the chapel to the left was the RC chapel, the central chapel was the wrong shape and the pitch of the roof ran the wrong way, but the nonconformist chapel, at the Clarendon Rd side, looks about right.
I know that conflicts with what I originally wrote, but I've studied the map again and also looked at a 1940's aerial view of the cemetery and surrounding area and now pretty convinced I have the right one. Also, as the aerial map is from the 1940's, it can't have been removed in the 1930's, so the old newspaper article, is probably from the 1950's.
DOH !  I have just read the newspaper clipping in the top left corner of the older photo and it actually tells us it was indeed the Nonconformists chapel. Dear oh dear, I must get myself to the opticians soon ;- )
Top image courtesy of  T. Griffiths and the Blackburn Times newspaper.
Bottom image taken by myself in April 2012
Posted by Blackburnlad at Tuesday, August 14, 2012