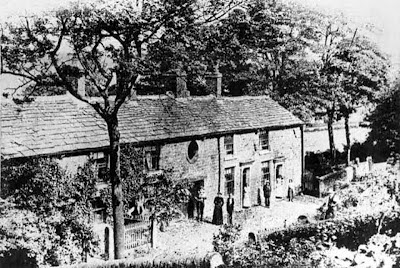 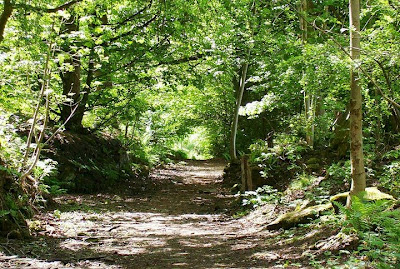 Last weekend someone asked me about Cuckoo Hall (sorry, I accidentally deleted your comment instead of publishing it). I think you were asking how large it was and where it was or something along those lines ???
Well as far as I'm aware, there was never a hall as such, it was just a name given to a row of four cottages that were just off the sharp bend, towards the top of Lammack Rd.
The top photo here, is the only one I know of, that shows the cottages. It dates from 1907.
To give you some perspective, the photographer would have been stood on the bottom slopes of the huge embankment that takes you up to the 'Tank'.  The cottages fronted / faced the hill that the 'Tank' is at the top of (Revidge Hill is it?). If you could see through the trees above the rooftops in the old photo, you would probably be able to see the QEGS playing fields and Mellor / Ramsgreave beyond.
The lower photo is one I took back in May 2010 for a Facebook group (the 'name this place' group). When taking my photo, I was stood on the bend of Lammack Rd, looking  into Cuckoo Hall (I would be to the far right, just out of view in the older photo). The cottages would be on the right hand side of my view. The gatepost you can see in my photo, would be one of the posts in the wall to the right of the cottages in the older image.
Robin Whalley and Peter Worden, in their postcards book, tell us that between the Jolly Dragoon at Four Lane Ends (opposite side to the Sportsman's) and the Hare & Hounds (facing Whinney Lane), these cottages were the only houses in 1848. Either side of them, in either direction, there would just have been fields. In fact, as you can see from the OS map, even as late as the 1930's, there was only the farmer's field between Cuckoo Hall and the cottage on the corner of Whinney Lane.
I used to deliver newspapers along both sides of Lammack Rd around 1970 - 71, when I was 12 or 13 years old and the site of the old cottages wasn't as overgrown, as they had only been demolished a couple of years earlier. Nowadays, there's virtually nothing left to see.
But sorry to disappoint you 'anonymous', as there wasn't a ''hall'' in that sense of the word (unless someone else knows differently).

This small section of an early 1930's map shows you exactly where the cottages were. The 'Res' (marked on the map) just over Revidge Rd from the tennis courts is the 'Tank' and as you can see, Cuckoo Hall was at the bottom of the same hill (just off Lammack Rd). 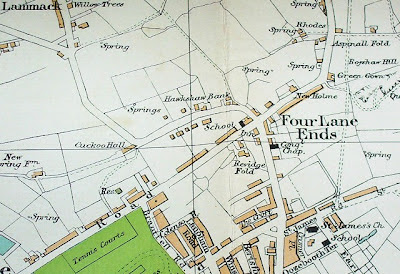 MAP SECTION COURTESY OF THE ORDNANCE SURVEY.
Posted by Blackburnlad at Saturday, September 15, 2012