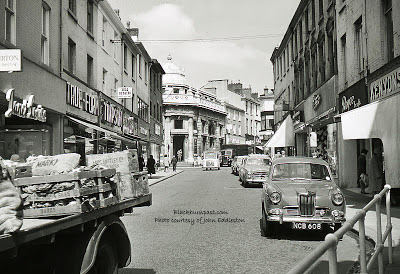 King William St viewed from the corner of Church St, looking north.
In the distance, on the corner of Lord St, is the magnificent National Provincial Bank, which was built on the site of the St Leger Hotel. The St Leger was the hotel, where back in 1875, John Lewis, Arthur Constantine and a couple of others met, with a view to forming a football team, which indeed they did. That team became The Rovers.
If anyone has a photo of the St Leger, I would love to see it.  I have a couple of old postcard images, where it is seen in the distance, but both are so indistinct, you would never know it was a hotel / pub.
Courtesy of John Eddleston
Posted by Blackburnlad at Monday, February 18, 2013