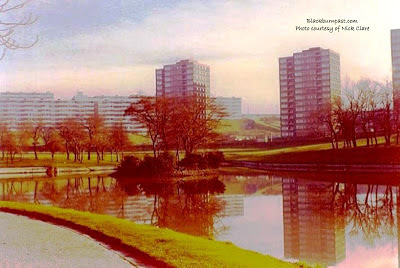 I think this is a superb photo of the lake and the flats at Queens Park. Nice colours, it almost looks like a watercolour painting and great reflections on the lake.
The photo was taken in 1974 by Nick Clare when he was living in the hi-rise blocks.
A native of Devon, Nick came to Blackburn for a visit to his wife's parents in 1972. During his visit, he applied for a job here, was successful and they ended up living in Blackburn for the next 12 years or so.
There's only a handful of photos of the Queens Park hi-rise that I'm aware of, mainly in black & white and even fewer of the deck-access flats that are in the background.
Courtesy of Nick Clare
Posted by Blackburnlad at Wednesday, February 13, 2013