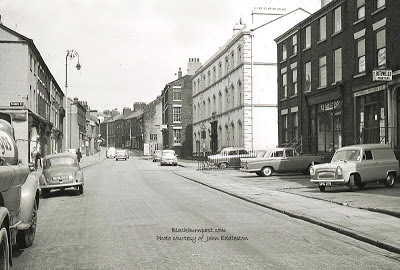 Looking up towards the top section of King St. I think the photographer would have been about level with the Kings Head Inn, perhaps just slightly above there.
On the right, the large, light coloured property is the place that many people remember from the 1960's and 1970's as the Employment Exchange. It was originally built as The Hotel, back in Georgian times (very late 1700's or very early 1800's I think it was built) and was used as the Assembly Halls, where many important decisions regarding the town's future were made. By 1851 we had our first elected town mayor (Hornby) and by 1856 a brand new Town Hall, so all political affairs and meetings were then moved to there.