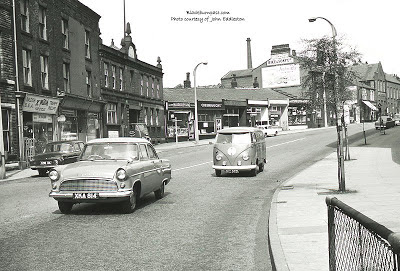 This is Salford, towards the bottom end, with the ornate building on the left (the one the vehicle is emerging from) that was once owned by James Pickup Wine Merchants, who were later taken over by Thwaites and became their wine and spirits department. The tall building further along, with the sign on its gable, was Rice's Printers, which had formerly (long, long ago) been The Peel Hotel, or Leach's Peel Hotel I think it was known as, because it was run by a Mrs Leach back in the olden days.
Towards the top right of the photo, on the end of that stretch, the Salvation Army Citadel can be seen, which is the only surviving building of those in this view.

Photo courtesy of John Eddleston
Posted by Blackburnlad at Sunday, May 05, 2013