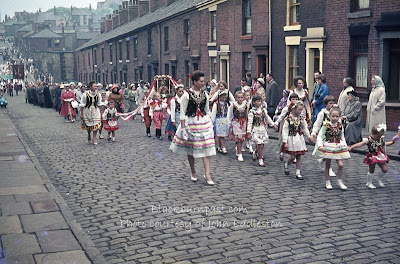 Of all of John Eddleston's photographs of Blackburn, well the ones that have been published (about 200 of them in total), this is the only known coloured photo (though it appears in the book in Black & White).
Taken in 1963, as far as we know, it shows one of the processions from St Alban's Church, as they make their way up Brookhouse Lane.
The caption in the book reads  ''The Polish community of St Alban's Parish, in procession along Brookhouse Lane''  The traditional dress of the ladies and the children certainly looks Eastern European.
I attended St Alban's School and took part in similar processions (well at least one) when I was about 6 years old.
This procession is going in the opposite direction to the route we took. We left the church / school, walked up Whalley New Rd to Bastwell, turned left along Whalley Range and then left again down Brookhouse Lane and back to the starting point.
Lots of these processions used to take place each year, most churches and their associated schools had them.
Photo courtesy of John Eddleston
Posted by Blackburnlad at Tuesday, July 30, 2013