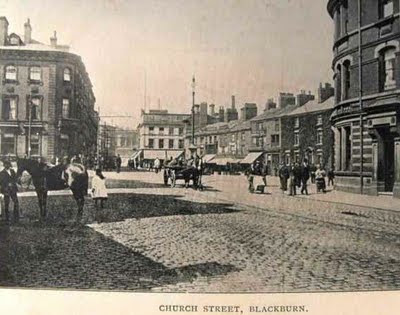 Although this postcard is titled Church Street, it does take in a fair old bit of Salford too. I would guess that the photographer had his tripod set up close to where the 'Little White Bull' (Pitchers Bar) is today.  On the left, at the corner of Railway Rd (Station Rd when this was taken), is the White Bull and on the right is the Bay Horse. Just to the left of the Bay Horse, is the ivy covered house on the corner of Holme Street, mentioned in another post, on the plot that would later be the Woolworth's store. Further left, close to Victoria Street, is the Golden Lion and at the top of this section of Church Street, at the corner of Darwen Street (though not very visible in this photo) is the Old Bull Hotel.
COURTESY OF THE CP COLLECTION
Posted by Blackburnlad at Wednesday, November 18, 2009