A Thwaites Dray on Eanam 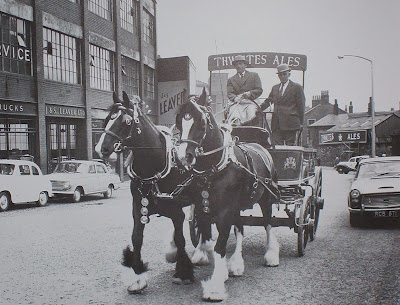 (Please click on the image to expand it)
Over the centuries, Blackburn has had quite a few breweries, ranging from small to very large. A few that spring to mind, are Park Place Brewery, Victoria Brewery, Snig Brook Brewery, Swan Brewery, Nova Scotia Brewery, Fountain Free Brewery (Redcap) and Nuttall's (Lion) Brewery.
The three largest were, Lion Brewery, Dutton's Brewery and of course, Thwaites Brewery.
Started in 1807, Thwaites are still going strong more than 200 years later.
One sight close to most Blackburn hearts, are the lovely drays, pulled along by magnificent Shire horses. When I worked at the college, there was many a morning I watched, as they delivered beer to the Courts Hotel on Blakeymoor/St Pauls Street.  These gentle giants, pictured above, patiently standing in the road, great clouds of warm air, billowing from their nostrils, as they exhaled into the cold and frosty morning.
PHOTO USED BY KIND PERMISSION AND COURTESY OF THWAITES ARCHIVE
Posted by Blackburnlad at Tuesday, December 22, 2009