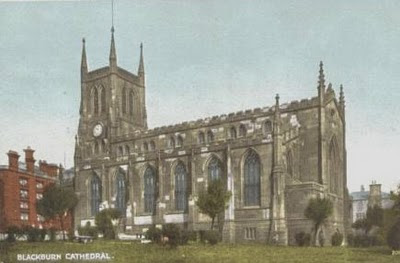 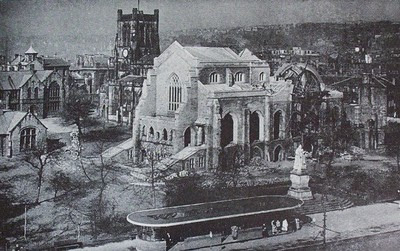 A couple of shots of the Cathedral, one pre extensions and one taken while the work was ongoing. Work commenced on the South extension, on 7th October 1938, but was then shelved during the Second World War. Not certain when they resumed work, but the lower photo (black & white one) was taken in 1950. They were still on with the extension, well into the 1960's, as I can personally remember builders on the site. As kids, we used to run up and down those sloping parts when no-one was around. Apparently, an outdoor pulpit was built into this extension. Was it ever used? The Freemasons paid for the South porch, according to a little booklet I have (published in 1968).
That bus shelter had long gone by the 1960's. It was replaced by those concrete ones, with the rails down the middle. The concrete ones were then replaced by the metal framed, glazed ones, we have today.
In about 1966, my younger brother Tony fell off Queen Vic's statue, while clambering about (he was around 7 or 8 years old at the time) and he cracked his head open. Someone took him to the Hake Boat, where they patched his wound up a bit. I can remember my mum going down to collect him. We had a late tea that evening, fish & chips I think.
COURTESY OF THE CP COLLECTION

Posted by Blackburnlad at Sunday, January 03, 2010