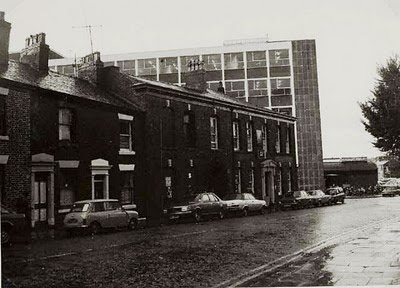 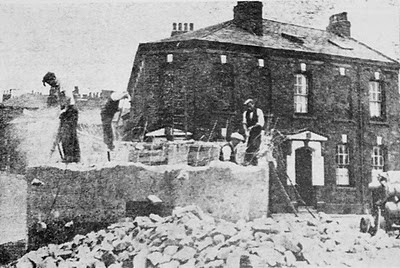 A couple of shots of the Vulcan Hotel on Nab Lane. The top photo is taken from the Blakey Moor side and the photographer was probably stood by the railings at the side of the Technical School (Victoria Centre of Blackburn College) and at a guess, I would estimate the date at being late 1960's or maybe sometime in the 1970's.
The second photo was taken lower down Nab Lane, approximately where the motorbikes are parked in the first photo, and was taken in 1950, as they cleared the site to build the first phase of the new Municipal Technical College (The Feilden Centre nowadays).
Everyone has their own memories of the Vulcan, mine date from the mid 1970's - 1980's. Always a great (and very loud) jukebox throughout the years. I can remember being in there during power cuts and drinking from bottles (the pumps were off) by candlelight. Health & Safety regs would never permit that now.
For quite a number of years, the Vulcan, the Courts, the Peel and the Queens had their own, very unique clientele. People that just seemed to wander between those four pubs all night and then ventured up to the Millstone (above the Dirty Duck / Castle) after hours.
TOP PHOTO COURTESY OF COTTONTOWN AND THE COMMUNITY STUDIES DEPT. BLACKBURN LIBRARY.
BOTTOM PHOTO COURTESY OF THE BLACKBURN COLLEGE ARCHIVE

Posted by Blackburnlad at Tuesday, January 05, 2010