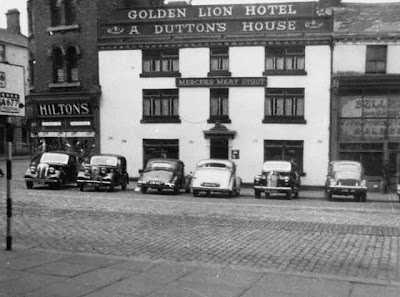 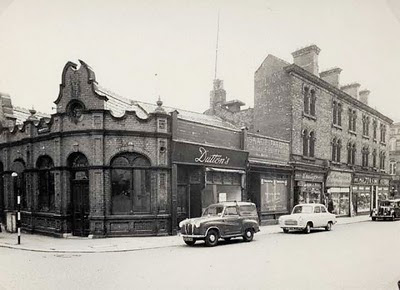 Top, the Golden Lion on Church Street and below, the Golden Lion Vaults on the corner of Ainsworth Street and Victoria Street (both photos probably date to the mid-late 1950's). Between them, they would have taken up a substantial portion of the plot that the Woolworth's store (later T.J Hughes) occupied.
For those not old enough to remember either, and I include myself here, the two backed onto each other and were in fact connected internally (see 'Inn' on the section of the OS map below). If you had turned right into Victoria St, where Hiltons shop is in the top photo and walked the short stretch of street, you would pass the shops in the lower photo and arrive at the ornate  doorway to the G. L. Vaults.
George Miller, in his 'Old Inns' book tells us how the Golden Lion was an important coaching inn, in its day and had at the rear, a large courtyard and stables. Stagecoaches left there for Liverpool, Colne, Burnley, Haslingden and no doubt lots of other destinations.
George Miller also tells us of how the cellars were flooded from time to time, when the nearby River Blakewater burst its banks, sometimes totally submerging the whole cellar area. There would be barrels of beer, floating around.
At the time the lower photo was taken, it looks as though Dutton's also had an off licence beside the Vaults. Again, please see the section of the OS map, to see the premises (the L shaped bit), which I'm assuming were an off licence by the 1950's. 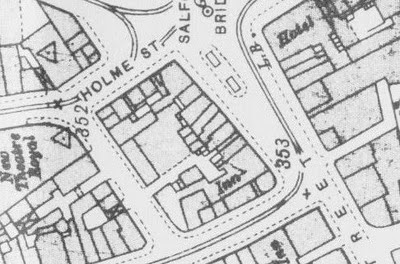 Posted by Blackburnlad at Tuesday, January 26, 2010