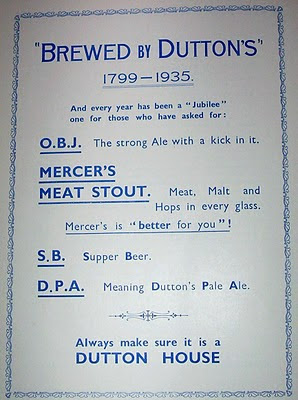 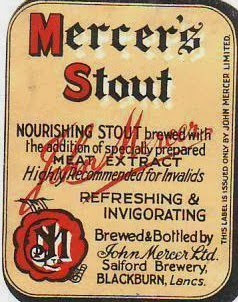 Just to compliment the previous posting, a 1935 advertisement from Dutton's and a Mercer's Stout label. Nothing better than a spoonful of Bovril or similar in your stout, I'll bet.
Quite a few of Dutton's pubs advertised Mercer's Meat Stout on their fronts and it was also promoted on their beermats, ashtrays and bottle openers, so it must have been a popular beverage. Mercer's were a small brewery in Adlington, near Chorley, which Dutton's bought out in 1929.
The jubilee mentioned in the Dutton's ad, was the silver jubilee of King George V.
COURTESY OF THE CP COLLECTION
Posted by Blackburnlad at Wednesday, January 27, 2010