Steam Tram at the Cemetery Gates 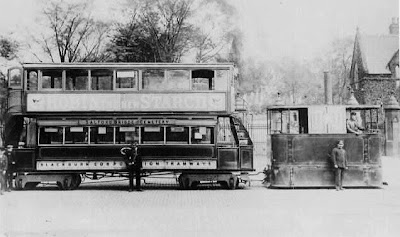 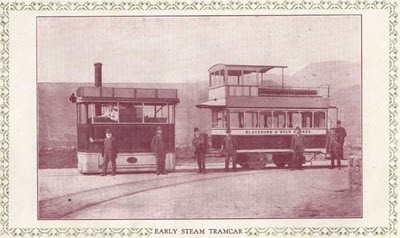 I don't know much about public transport (bit of an admission that, for a time served coach builder), but I like some of these old trams. Here's the Salford Bridge-Cemetery steam tram, parked up outside the cemetery gates. I'll bet they were a sight to see, trundling by, puffing steam out of the engine. Bet they made a bit of a racket too.
The second photo, I have only added to accompany the top image. It says Blackburn & Over Darwen on the side of the trailer car and by the look of the hilly backdrop, it looks like the photo may have been taken in Darwen.
COURTESY OF THE INTERNET (and of course the Blackburn Corporation Tramways Department)
Posted by Blackburnlad at Monday, March 01, 2010