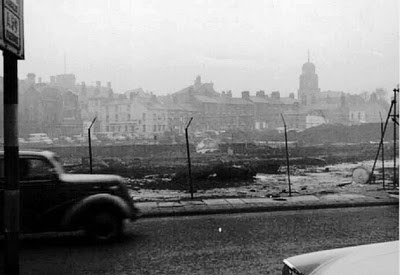 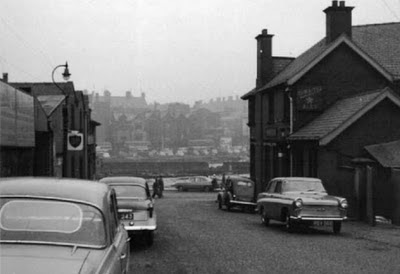 A couple of photos taken by Terry Lavelle in the early 1960's just prior to the building of the new market hall(s). Terry's photos were taken from Starkie Street, which is just off the bottom of Penny Street, where The Fleece pub is situated (see lower photo).
The Victorian properties on the other side of Penny Street and the streets just beyond it, had only recently been demolished, allowing a clear view of Ainsworth Street in the distance. The Haymarket pub (the light coloured building) on the corner of Cort Street and the dome of St John's Church can easily be picked out in the upper shot.
These photos would have been taken sometime in 1963, as the market hall would have been nearing completion by the autumn of 1964.
It's interesting because, in the not too distant future, the 1960's market halls are going to be demolished and Ainsworth Street will again be visible from this same spot, although this time, the shopping precinct / Mall will be prominent in the distance, as The Haymarket and the other properties along Ainsworth Street also disappeared in a later phase of the 1960's redevelopment of the town centre.
Progress and the ever changing landscape of our town ?
Below is a 1970 postcard image of the market hall that was built on the above plot of land, though photographed from a different angle (Penny Street runs up to the right, towards Larkhill,  in the postcard photograph). 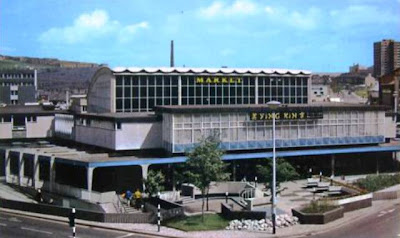