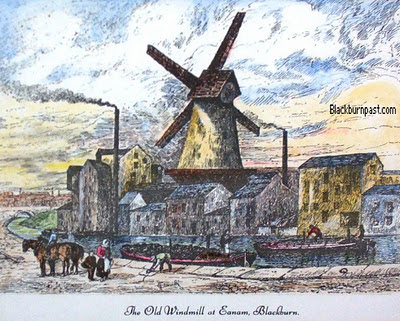 Not a lot of people are aware that Blackburn once had a windmill, but as you can see from this drawing by Charles (Chas) Haworth, we had one just off Higher Eanam.
Built in 1822 by Samuel Derbyshire of Audley Hall and the appropriately named John Miller, it stood on the canal bank just a little further on than the Navigation Bridge, which is the bridge that still carries the traffic over the canal to this day.
Samuel and John had bought the land from the canal company for £160, no doubt a small fortune in 1822. The canal itself was still relatively new, having only opened through Blackburn in 1816 and although it's hard to believe today, nearby Copy Nook was back then regarded as being on the outskirts of the town.
I've no information as to how much it cost them to build the windmill, but they sold it to John Polding (a corn dealer, who had premises on Darwen St) in 1829 for £1,450. He operated the windmill until his death in 1862 and then his son carried on the business for another 20 years. It was then converted to other uses and stood without its sails for a few years, before finally the huge round tower itself was taken down in the late 1880's.
If you look on the section of the 1929 O.S. map below, you can get an idea of where it was situated. As you can see, on Dock Street, next door to the Alexandra Picture Palace/Theatre, there was a business (marked green) called Windmill Works. On the corner of Dock St and Higher Eanam (marked red) stood the Millstone pub, no doubt another reference to the one time presence of the windmill. In fact I'm sure I read somewhere once that a circular millstone lay abandoned in that vicinity long after the tower had been removed.
To give you some perspective of where we are, the building(s) marked 'Warehouses' are what most of us refer to as Eanam Wharf and the building (marked blue) on the end of Higher Barn St is the former Globe Hotel. (the other pub marked blue is the long gone Fox & Goose).

Posted by Blackburnlad at Sunday, December 04, 2011