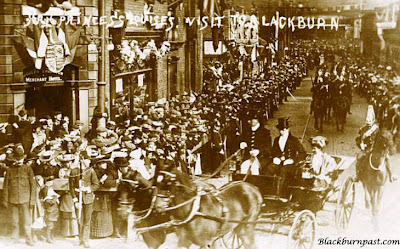 This is the visit of Princess Louise, who was in Blackburn on the 30th September 1905 to unveil the statue of her late mother Queen Victoria, on the Boulevard.
This photo was taken after the unveiling, as they're just coming out of Jubilee St and turning right into Darwen Street. Just look at the crowds
That corner door to The Merchants was still being used right into the 1990's, though it's blocked up now and the pub has changed its name and is part of the Last Order's chain.
There's a couple of other photos of this visit elsewhere on the site (in fact one is on twice). Just type in Princess Louise into the search in the top left corner and they should appear.
COURTESY OF THE CP COLLECTION
Posted by Blackburnlad at Friday, May 11, 2012