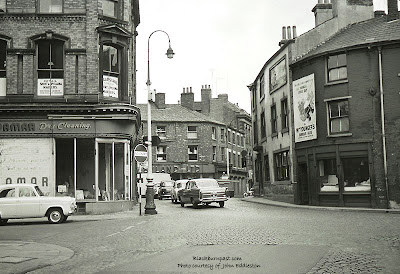 This is Astley Gate viewed from Cardwell Place. The street to the left where the light coloured car is, is Corporation St which is still with us. A little further on, beyond the line of cars, is the corner of Northgate and Higher Church St.
On the right is The Swan Hotel and the premises next door to it (where the William Younger's advertisement is), was for many years I believe a tripe dealers.
If today you stood where the photographer was standing, you wouldn't see any of the above. The ramp up to the Mall car-park would be where the car and building to the left are, that corner beyond the cars is where Debenhams' store and the pedestrian walkway up to the shopping centre is now. The Swan disappeared a few years ago, replaced by a three or four storey glass and brick folly and the tripe shop and adjoining buildings went a few decades ago (early - mid 1970's?).
You would still see cars driving down the street though. Traffic of one sort or another has passed through there for centuries, along the ancient route from Blackburn centre to Preston.
Photo courtesy of John Eddleston.
Posted by Blackburnlad at Thursday, March 14, 2013