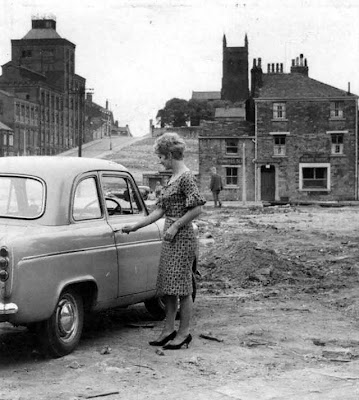 To the left of this photo, is the Swan Brewery on Moor Street / Mount Pleasant. Built in 1894-5, it was owned by the Blackburn Brewery Company. They sold it in 1928 to Dutton's (along with 100 pubs) and although brewing then ceased at the site, Dutton's used it for storage and garaging, right through to the 1960's.
The pub on the right, is Ward's Hotel, which stood on the corner of Syke St and Cleaver St.
I can remember, as a kid, in the early 1960's, playing on that cleared site between the rear of the pub and Holy Trinity Church, though I think the pub had also been demolished by then, as I don't recall it.
Around the time this photo was taken, singer Kathy Kirby had her car nicked from the rear of a theatre in Liverpool. They found it dumped on waste land in Blackburn. I'm pleased to report that Kathy and car were reunited the following day;-) 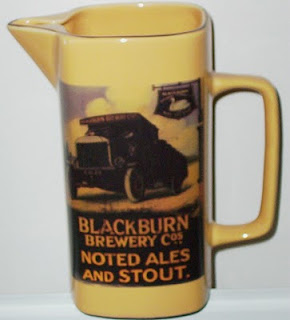 Posted by Blackburnlad at Sunday, January 10, 2010